Cristiano Ronaldo situation is messy for everybody, says Gary Neville | Jamie Carragher: Man Utd better off without him 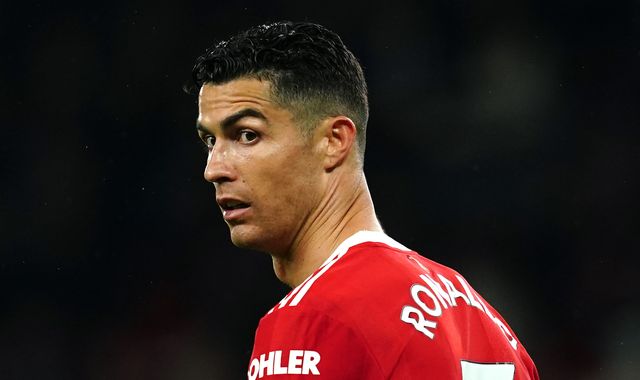 Gary Neville has called on Cristiano Ronaldo to speak publicly about his future at Manchester United, believing the "messy" situation has caused an unwanted distraction for new manager Erik ten Hag heading into the new season.

Ronaldo has asked to leave United and only has 45 minutes of match action under his belt from pre-season after family reasons kept him away from the club's summer tour.

Ten Hag has confirmed Anthony Martial is out of Sunday's visit of Brighton through injury but refused to reveal if Ronaldo will start in his place. The 37-year-old and Marcus Rashford are the only direct striker replacements for Martial, unless Ten Hag opts for a false nine as he experimented with in pre-season.

Ronaldo reportedly wants to leave United in order to play for a club competing in next season's Champions League, but Neville maintains the Portuguese should clarify his position to supporters at a time when the club are seeking some much-needed stability.

Speaking on Friday Night Football, Neville said: "The Ronaldo situation is distracting. You saw Ten Hag in the press conference on Friday having to answer questions about it.

"The fact Anthony Martial has got injured and he is the only other centre forward, and he actually was going to leave the club six months ago.

"The fact they haven't got Frenkie de Jong in, the fact you haven't been supported in the way the other managers have and getting the signings early, I think it all means it's a more difficult job for Ten Hag than it already was."

When asked if he'd start Ronaldo, Neville added: "If Ronaldo is fit you start him, and I hope he stays.

"I'm a little bit disappointed in him because he's letting the manager go into those press conferences. Cristiano Ronaldo is now a good age. He's been the greatest player in the world along with Lionel Messi for the last 10 years. He's got all the experience in the world.

"Would it be too much to ask for him to come out and do an interview to clear things up, tell us what he's actually thinking and what actually is happening?

"Obviously, Sky are going to ask for him on Sunday after the game. Is he going to come out, stand up, do the interview, and not let everyone else have to answer the questions for him?

"So, for me, I am disappointed because that clarity we haven't got and the reason Ten Hag is getting a bit jumpy in his press conference is because he's being asked difficult questions. He's probably not really telling us the truth of it because he can't.

"The reality of it is if a Champions League club comes in for Cristiano Ronaldo in the next two weeks, I think we know he wants to take that move. We know that. It has emerged over the last few weeks.

"At the moment, no-one has come in for him. So, that is why the club are saying at this moment in time that he may stay and we want him to stay, but if someone came in I think he would go.

"Should Manchester United be waiting two to three weeks before the end of a transfer window as to whether their star centre-forward leaves? I don't think they should be in that position.

"Do they just say no and tell him he's staying come what may? That would be clarity from the club I suppose but then there's a big risk that Cristiano in two weeks' time throws his toys out of the pram and says I'm leaving.

"That is the sort of thing that could happen and that's why I find it unpalatable.

"There's a bigger thing for me also because I want his Man Utd career to end well. What he's achieved at the club and what he's achieved in the game, is it too much to ask for the next 12 months for him to encourage the young players, be a leader on the pitch and do the interviews when your team win and when they lose.

"Make sure you set the standards that he always does in training in terms of his performance. Score the goals and let everybody be fair and let him leave Manchester with just the highest thoughts.

"They never look good. They always look a little bit distasteful, and I think it needs clarifying. It needs sorting out quite quickly because we can't have this for another three weeks if you are a Manchester United fan, and certainly if you are Erik ten Hag.

"He does need to be able to concentrate on the whole team, on his performance and on the tactical way of playing. He doesn't want to be distracted all the time by the star player and if he's going to stay or go."

Ronaldo was absent for United's recent pre-season tour of Thailand and Australia and only returned to training last week, when he and his agent, Jorge Mendes, held further talks about his future.

United are insistent, however, that they will not sanction the sale of the five-time Ballon d'Or winner, who is firmly in Ten Hag's plans, although the new United boss has admitted the player is still a long way behind his team-mates in terms of fitness.

The loss of Martial, who performed well during pre-season, for United's season opener has left the new manager in a potentially awkward situation so soon into his tenure, after also labelling Ronaldo's early departure from Old Trafford - along with other players - during last weekend's friendly with Rayo Vallecano as "unacceptable".

Much has been made of whether Ronaldo fits into the new style of play Ten Hag is trying to implement at Old Trafford and whether he still has the ability to press from the front and play in a modern system.

Jadon Sancho and Marcus Rashford, alongside Martial, have shown signs of a resurgence in playing as a more fluid front three during pre-season, and Jamie Carragher feels United now need to draw a line under the Ronaldo saga.

"I've been critical of the Ronaldo signing since he came in and I said that Ten Hag should really be moving on from that," Carragher said on Friday Night Football.

"I know it is easier said than done to move a player out but really, we want him to stay because we talk about him, and he provides headlines. He's Cristiano Ronaldo.

"So, really looking at it from an analytical point of view at Man Utd, I think they would be better without him and almost starting afresh with a younger team.

"But, in terms of our job and what we do, covering the big names and talking points, he is an absolute superstar. He's a mega star.

"If he plays at the weekend we'll all be focussing on him and analysing his performance, his body language and what he's like with the manager on the side of the pitch.

"He's a huge story and that is why in some ways you want to keep him in the Premier League."

Who will be on the move this summer when the transfer window closes at 11pm on September 1?

Keep up-to-date with all the latest transfer news and rumours in our dedicated Transfer Centre blog on Sky Sports' digital platforms. You can also catch up with the ins, outs and analysis on Sky Sports News.