Where do The Charlatans actually come from?

Tim Burgess and co are often lumped in with the “Madchester” sound, but are they genuinely Mancunian?

The Charlatans, they’re a great band, aren’t they? A great Manchester band. But are they actually from Manchester?

Tim Burgess was born on 30 May 1967 in Salford, which is part of Greater Manchester (but is a City in its own right, let’s not forget, bordering on the City of Manchester).

So Tim is from Greater Manchester. However, as a child, he moved to Northwich in Cheshire, about 20 miles South West of Manchester.

Meanwhile, The Charlatans were formed by bassist Martin Blunt back in 1988 in the West Midlands, who enlisted Jon Brookes on drums, Rob Collins on the distinctive Hammond organ, Jon Day on guitar and the band’s original singer, Baz Ketley.

In 1989, the band relocated to Northwich. This was down to the fact that the band’s new singer was… Tim Burgess, resident of the Cheshire town.

As Burgess explained to The Line Of Best Fit in 2010, “Our old manager, Steve Harrison, was based in Northwich so we based ourselves there. We used to sleep in his record shop after gigs, that was our base.”

The shop in question was Omega Records in Witton Street, and was the home of Dead Dead Good, the label that issued a tape of demos by the fledgling band in October 1989. The lead track, Indian Rope, was to be released as the debut single by The Charlatans in February 1990.

So ultimately, The Charlatans were a Manchester band that was from Cheshire, with a lead singer from Salford and the other members were West Midlanders. OK?

To make things simpler, Tim Burgess says: “I personally always think of us as a Manchester band.” 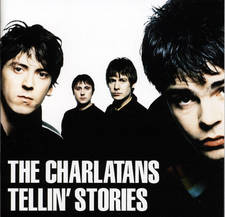 Bands that changed their musical style

The jobs rock stars did before they were famous